Journal
You are here: Home1 / Journal

The August 2021 ABV release has boosted the status of Australian Jerseys.

Jersey Australia general manager Glen Barrett said there was stability in the Jersey proofs and a welcome emergence of young genomic bulls graduating to the Proven lists with enhanced proofs.
There were 14 new release Australian young genomic bulls sourced from nine studs and marketed by five A.I companies, which Mr Barrett described as a positive for the Australian Jersey breed. “This is the biggest new release of domestic bulls for many years, which is a strong sign,” he said.

“Breeders should be congratulated for maintaining faith in their breeding programs. With growing global interest in Australian Jersey bulls, there are exciting times ahead for the breed.”

Jersey bull proofs have improved as new daughters joined herds across Australia, with bulls such as DOUGGAN and INVINCIBLE adding 91 and 51 daughters respectively.
DOUGGAN, marketed by Genetics Australia and bred by White Star Jerseys, was the number one bull on the August ABV, improved his proof by 38 BPI to 431 with a high jump in daughters flowing from autumn calvings into his proof.

INVINCIBLE was another big mover, adding 68 BPI points to 394 BPI.
World Wide Sires’ Australian bulls JIMINY, BPI 387 and MATT, BPI 347 were second and third, with White Star bred bulls PUBLICAN with a BPI of 319 marketed by Agri-Gene and VALENBLAST in the GA stable with a BPI of 317 rounding out the top five bulls.
CSCWOODSIDE – Gelbeado Park WOODSIDE, a MATT son from the Central Sires Co-op / ABS Global – Australia stable, is a new bull on the market and tops the young genomic list with a BPI of 396. GA bulls INVINCIBLE – Loxleigh Hatman VInce 5963 and PICKLE – Wallacedale Pickle with a BPI of 387 round out the top three on the young bull lists.

Rob and Sandra Bacon’ Brookbora Jerseys retained the number one Herd spot with a herd BPI of 191. Con and Michelle Glennen’s WHITE STAR Jerseys was second with a BPI of 176 followed by John and Marg Cockerell’s WARRAIN Jerseys with BPI of 166.

The top young heifer in the August ABV release was LANGDALE MATT NAOMI 2, owned by Darien and Alex Matthews and with a BPI of 392.

John and Margaret Cockerell’s WARRAIN IRWIN LOVE LIES was the top cow with a BPI of 491 up from 477.

Top cow on conventional proofs was JACKIAH VALENTINO PRIMROSE 3000 owned by Simon Reid with a BPI of 500. 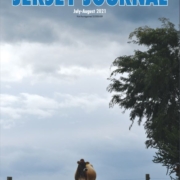 The July/August 2021 ediiton of the Australian Jersey Journal was recently published andd anotehr crakcing edition it was.

In this edition we

Mr Akers brings a wealth of leadership and governance experience to the Board having previously served on the boards of Dairy Australia, Murray Dairy, National Dairy Alliance and Northern Victoria Irrigation Renewal Project including terms as Chair of Dairy Australia and Murray Dairy.  Mr Akers also chaired the VFF Water Council.

Jersey Australia President Lisa Broad acknowledged the significant experience and capability of what Mr Akers will bring to the Jersey Australia Board. “Geoff’s skills in governance and directors role will be highly advantageous for Jersey Australia as we continue the positive changes we have made to improving the governance of the Association”.  Ms Broad also noting  Geoff’s strong relationship with dairy industry groups.  “Geoff is well respected within Industry groups and will enhance the work that JA has been doing to build stronger industry relationships”.

Ms Broad thanked Mr Akers for committing to the Board noting his keenness to continue building on established projects as well as bringing fresh ideas to the Board.  “Geoff is very willing to contribute and grow the Jersey Breed in Australia”.

At the 2021 Board elections, only 3 nominations were received from members for the 4 vacant Board positions.  The Jersey Australia constitution enables the JA Board to fill any vacancy with a casual appointment.  Mr Akers will be required to re-nominate in 2023 should he choose to continue on the Board. 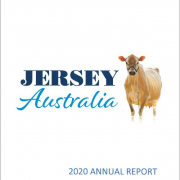 That they have had a potential Tier-2 exposure to COVID-19.

Following this, the Jersey Australia board took the appropriate action and postpone the 2021 Annual General Meeting to mitigate any potential further risk.  Members and guest’s health and wellbeing was our highest priority.

We are pleased to advise the attendee has been tested for COVID-19 and has tested negative.

The Jersey Australia 2021 AGM will be re-schedule and be held on Thursday June 24th 2021 via video conference on zoom.  Members will also be able to phone into the meeting.   Please registered your intention to attend by clicking  on the following link and completing the registration form.

On completion of the registration, you will receive the meeting details via email.  If you do not have access to register online, please contact the Jersey Australia office and we will provide appropriate phone in details for the meeting.

All members will have opportunities to raise questions of the Board and Association.  If you have a question you would like to table in advance, please forward your question to Glen Barrett on Glen.Barrett@jersey.com.au.

If you have any questions relating to the postponement and rescheduling of the AGM, please contact Glen Barrett on 0418 466 371 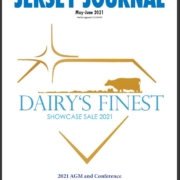 CrhThe May / June 2021 edition of the Australian Jersey Journal is out now and what a cracking edition it is.  Our thanks to the many advertisers and supporters who have made this 56 page edition.

In the Journal, we: 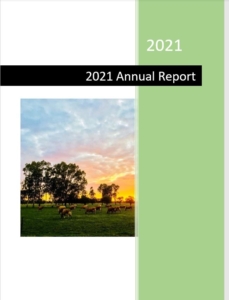 27th of May at 9am for the 2021 Annual General Meeting and thank the Central Gippsland Club for being welcoming hosts.

We also recognise the value of ensuring members who cannot travel in person can also attend and we will also be streaming the AGM via video link.

As per the rules of the Jersey Australia constitution, nominees for the Board were sought from eligible members to fill four(4) vacant positions on the Board.  3 nominations were received and accepted by the Returning Officer at the closing date of nominations at COB, Thursday April 15th 2021.

The received and accepted nominations were received from

On behalf of the members of Jersey Australia, I congratulate the nominees on their appointment to the Board.

If you have any questions relating to the nomination and appointment process, please contact me on 0418 466 371.

The 2021 AGM and Conference is being hosted by The Central Gippsland Jersey Breeders Club and will be held from the 24th – 27th of May in Warragul VIC.

The Central Gippsland Club have an actioned packed conference planned with herd visits to Kings Ville, Youngstar, Riviera, Attaview, Wallacedale, Majestic, Araluen Park, Stonyrun Aus and Kings View Jerseys, visits to the Ellinbank Research Farm, and the Anderson Family dairy and jersey museum and a visit to Yarragon.  Combined with some the JA AGM and Awards dinner this is an exciting event that will bring members from across the country.  And do not forget Dairy’s Finest Sale with 30 of the very best Jerseys available some of Central Gippsland’s best restaurants and special treat with a Jersey theme lunch.

Book and pay for AGM and Conference dinners at Dinner Bookings

To book and pay separately.

Kings Privilege Room $159 per nigh 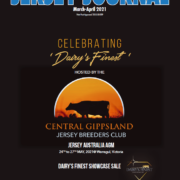 The March/April 20021 Edition is out now in your mailbox and is another bumper edition.

With the 2021 JA AGM heading to Warragul and hosted by the Central Gippsland Club in May, in this edition we: