You are here: Home1 / KEEPING THE CUSTOMERS SATISFIED

Amy McDonald and her sisters might be enduring the toughest drought in their farming careers but there’s one thing that keeps them inspired…their customers’ love of Jersey milk.

“Our customers love us and keep us going,” Amy said.

“We make premium-priced products and there are people who say it’s too expensive but that’s where we are in the market.” 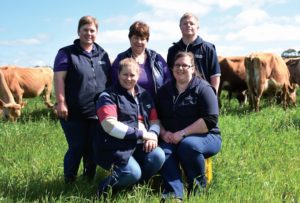 Jersey Fresh’s products are pasteurised but not homogenised. “We get people who say it’s just the way milk used to be and they’re happy to pay more for milk like that,” Amy said.

The Barossa region is also loyal to the family with local restaurants and baristas seeking out quality milk products to complement their food and wines.

This year has been particularly tough but Amy, Paula and Lisa are constantly re-assessing their business, always looking to find the right products to appeal to the local market.

Jersey Fresh stems back to the late 1970s when their parents Jeff and Erica Kernich started registering Jerseys. They took over the family farm after they were married in 1980 and kept the Carcoola stud name.

Around the turn of the century as they were leaving school, the sisters realised that if they wanted the farm to continue, they would have to step up, alongside their brother Mark, who has Down Syndrome, and continues to be a valued part of the farm team.

“We were brought up around the cows and doing stuff on the farm,” Amy said.  “I thought why can’t we do this. It was coming into the time when women were really starting to get involved in the industry.”

Amy and Paula returned to work on the farm after high school, prompting discussion of value adding.

“We’re only on small acreage (75ha) with 80 to 100 cows and Dad could see that we needed something else to make money,” Amy said.

“We were landlocked by vineyards and the price of land was quite high so we had to value-add.”

“We’re not very big and we don’t have a lot of irrigation so we’re basically dryland farmers and feed-lotting, which was the only way we could do it.”

The concept of value-adding was relatively novel coming into the new millennium, but that didn’t deter the family.

“We looked into cheese and I did a cheese course but I came home and said to Dad, I’m not a chemist and I’m not passionate enough about cheese. I’ll eat it, but I’m not going to make it.”

They instead decided to focus on the white milk market, building a processing plant on-site.

It was initially difficult to convince banks to finance the project but everything came together and Jersey Fresh was launched in September 2004, with the plant being built in a prototype shipping container.

“We were on such a steep learning curve; we had to learn everything from barcodes and labelling laws to delivering into supermarkets and we’re still learning,” Amy said.

Jeff always tried to keep ahead of things and taught all family members to take on responsibility, a trait that held Jersey Fresh in good stead.

The emphasis has always been on fresh product with a quick turnover. They started with a full cream milk but quickly saw demand for cream. 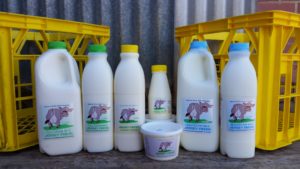 “Food and wine are a big part of the Barossa and people wanted good quality cream, so we developed our reduced fat and cream range,” Amy said.

The pure thick cream – the type where you tip the pot upside down and it doesn’t come out – caught the taste buds of those wanting a dollop on their scones, but local chefs also wanted a thinner, pouring cream, so a new product emerged about 10 years ago.

About a year ago they launched a cold brewed iced coffee, developed with a local coffee roaster, Bean Addiction.

“Heating coffee beans makes them more bitter, cold brewing brings out the sweetness in the beans,” Amy said. “It’s unique in that nothing else is added but it still has sweetness because it is Jersey milk cold brewed.”

It’s been a good addition and a chocolate milk is the next potential new product. “We’re trying to find something locally produced that we can use without adding extra sugar so we can have that health benefit. There are heaps of flavoured milks but they all add sugar. We want to catch a different part of the market.”

The cows produce about 1500 litres of milk each day – although this drought described by Amy as the worst she has endured – may lead to a reduction this year.

They also supply a small amount of milk to Saputo.

Paula runs the breeding, cattle and dairy, Lisa runs Jersey Fresh brand and Amy does a bit of both and also milks the cows.

The sisters now have 10 children between them and have survived the tragedy of losing their father in a farm accident.

“Dad died nearly three years ago and we had to decide to keep going or not,” Amy said. “We had to take the bull by the horns but we still question and review everything, especially now we’re going through a drought.”

Paula’s husband Scott has taken over Jeff’s role in cropping and pastures, while continuing to work full-time.

“We all pitch in and try to keep each other going,” Amy added.

The Barossa Valley remains loyal to Jersey Fresh and the family.

“The story behind the family helps to sell our milk,” Amy said. “People know us and are more inclined to support us.”

Local restaurants and bed and breakfasts are all on board, as is a recently arrived mobile coffee van.

But Amy has a simple answer for the milk’s success.

“It tastes better,” she said. “I think Jerseys have that creaminess, a different taste and texture to their milk.”

“I don’t think you could do it with Holsteins; they don’t have the same advertising advantage of some of the smaller breeds such as the jersey and Guernsey.

“Jersey sells it for us. A lot of people associate Jerseys with their house cow. It takes them back to the tradition of having a house cow in the back yard and that was usually a Jersey.”

Availability
Every Saturday at the Barossa Farmers Market, supermarkets in the Barossa, shops in Kapunda, Clare, Auburn and Adelaide. Contact them for a complete list of stockists.