TAKING IT TO ANOTHER LEVEL

You are here: Home1 / TAKING IT TO ANOTHER LEVEL

When Rob and Kristen Berger wanted to take their ice-cream to another level, they looked straight at Jersey milk.

Their Frost Bite Stone Cold Ice-cream business started in 2013 alongside their Mexican restaurant in Warrnambool in south-west Victoria.

At the time they were selling pre-processed ice-cream, which was nice but Rob thought they could do better. 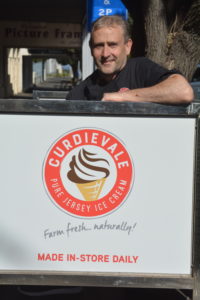 In 2017 the Bergers built a stand-alone shop and decided to make their own ice-cream using Jersey milk as the base.

“Once we separated, we decided to take our ice cream to the next level and that’s when we started producing our own,” Rob said.

“You’ll find 99 per cent of manufacturers use pre-processed or powdered milk to make their ice-cream but we wanted to be different.

“I thought what we were selling previously was quite good until we started making this; there’s no comparison. The higher fat content adds to the creaminess and the texture of the product, which takes us to the next level.”

“This in house made ice cream was a delicious end to a very hot day; the jersey milk ice cream was delightful,” says one reviewer.

“The cones are fresh and the jersey milk ice cream is a blast from the past with lots of yummy flavours,” says another.

“People are blown away by it,” Rob said. “Local people expect it but the out-of-towners come in and they can’t believe it and they come back day after day.”

Rob admits it was a long and tedious process getting approvals from Dairy Safe Victoria.

“Once you start using raw milk direct from the farm, which we do, regulations go to a whole new level,” he said.

“There are always safety programs but it’s 10 times more involved when you’re using milk straight from the farm. It’s all about traceability, and regulations and monitoring during construction are very high, even for a small business. They look at us the same as Warrnambool Cheese and Butter; we have the same constraints as they do.”

Although an experienced chef, Rob admits making ice-cream was a “big time learning experience”, with suppliers providing advice on how to use the machinery.

“I had to go through the process of learning the procedures and the best way to do it. It was a bit of trial and error, not that we’ve had too many errors with the different flavours.”

The ice-creamery now has 46 flavours, with 90 per cent of products sourced from Jersey milk, supplemented by some sorbet and vegan varieties. 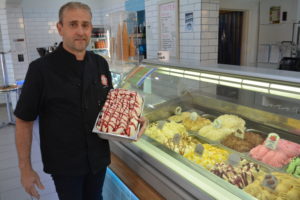 The key is making a good base and that’s where the Jersey milk excels. “The base is the Jersey milk. If that’s spot on, which it is, everything else follows from there and you work on it to get the right consistency and texture,” Rob said.

The milk is sourced from a Jersey farmer in nearby Nullawarre. “We do a regular run and collect 200 litres each time,” Rob said. “We can only produce a certain amount of the base at a time so it’s a continual process. You have to age the base for a minimum of 24 hours but no more than three days, which is its premium time.”

The base is created in a pasteuriser that heats the milk from about 3-4 degrees to 87-88 degrees within a very short period of time.

This creates a plain base which is stored and then supplemented by ingredients and flavours. It is then mixed and frozen of batches in eight litre lots.

The success of the stand-alone ice cream business has prompted the Bergers to look at new markets.

“When we cut down from restaurant and ice-creamery to just the ice-creamery we wanted to mellow out a bit, but that hasn’t happened,” Rob admitted.

They are exploring options for wholesaling the ice cream, though that would add an extra layer of traceability and regulation.

“That is where we’re looking to go, possibly pre-packaged items into delis or supermarkets, initially locally but also potentially on a wider scale,” Rob said.

“We’ve also found in our research that the Asian market is very keen on Jersey products. There’s potential there and we’re researching possible grants to increase production to do that.”

In the meantime, they are happy to continue appealing to the taste buds of locals and tourists visiting the coastal city.

They’ve even had parents say the ice-cream didn’t upset their dairy-intolerant children.

“I feel much better in what I’m producing and serving to the public. My daughter says customers always ask what makes our ice cream so good, to which she simply replies…Jersey milk.”